The gut is not just the site of your digestion it is also a key part of your immune system and the site of a good deal of the information relayed to and from your brain. It has even been called the ‘second brain’ or ‘enteric brain’ as it contains 100 million neurons i.e. more neurons than the spinal cord or peripheral nervous system combined[i]. It is responsible in no small part for how you feel; your mental state, mood and health. For instance, 95% of the feel-good chemical serotonin in your body is found in your gut. This fact has been suggested as the reason why many mental diseases have correlates in the gut e.g. autism and depression often have gut symptoms associated with them.


Vitally, via the roughly 100 trillion bacteria that it contains[1], called the gut microbiome, it contains enough bacterial DNA to produce a vast array of the metabolic products (vitamins, neurotransmitters, enzymes, and signaling proteins called neuropeptides) that our body needs to function. It has been said the human being is simply a highly evolved, complex host for bacteria  In fact, evolution has shown us that bacteria have often been instrumental to the development of the organism, as they have developed in symbiosis with us[ii]. Babies born via Caesarian section often have poor gut function as they have not been properly inoculated with their mother’s gut flora via a vaginal birth[iii]. This may cause the children to have more allergies and health issues than children born normally, including mental health problems. Given the increasing use of C-section in hospitals, and the likelihood of deficiencies being passed on from  that child when she too has baby, this has health implications for us as a society not just as individuals.
The importance of the gut in general health is often ignored. Nutrition is mostly ignored when you engage with conventional medicine. How often has your doctor asked you about your diet when discussing your mental  – or even your physical - health[2]? Having a good balance of gut flora is vital – I am not looking at purely psychological factors here as I am only too aware that the balance of your gut microbes is crucial to your mental functioning. Your gut microbiome balance is vital to functioning. Unfortunately as your microbes get more out of balance, your digestion becomes poorer, you intake less vital nutrients and your gut gets further depleted and imbalanced. Opportunistic bacteria and resident yeasts begin to take hold. Symptoms are gas, bloating, itchy, flaky skin, cravings for sweet foods, and ‘foggy’ brain. You can see it is a cycle: poorer digestion – less nutrients and higher yeasts – poorer digestion.
Figure 1 Digestive tract and immunity 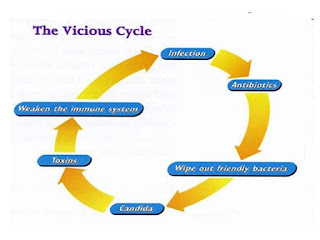 Let’s look at one example of how this works. The gut is one of the most important sites of  your immune system – the gut wall is, after all, a form of modified skin and as such is an entry point of pathological microbes (i.e. the unfriendly type!). Hence it’s not surprising that the most evolutionarily ancient immune function (called the ‘innate immune system’), is based here. It is the essential non-specific first-line defence to invasion controlled by the release of inflammatory molecules called cytokines. These are peptides (small proteins) produced in the body which control inflammation. Continuous stimulation by bacterial structural cell wall sugars called lipo-polysaccharides activate the immune system to be in a state of constant alert, helping to keep it activated. Bacteria keep us primed!


The release of cytokines is controlled by the balance of these polysaccharides and it helps the body maintain its immunity and, via their or its interaction with the stress response, even its normal sleep pattern (they are involved with the transition to Rapid Eye Movement sleep from non-REM sleep). This is important for dreaming and restful sleep. So, the balance of your gut flora influences your immunity and the quality of your sleep; therefore both directly and indirectly affecting your health using bi-products of their metabolism. This leads to the perhaps surprising conclusion that bacteria are essential to our physical wellbeing.
However, they also govern the balance in your mood and anxiety levels via the serotonin and other neurotransmitter levels they produce. Surprisingly most of the serotonin in your body is found in your gut. This is why when we increase levels via anti-depressants (the SSRIs like Prozac reduce re-uptake) you often get gut problems as a side-effect; oo much serotonin is just as much of a problem. So gut flora are vital for mental health too.
Another factor influenced by your gut bacteria is the permeability of your gut. With a standard western diet (also called the ‘standard American diet’  (SAD) in the US), your ‘bad’ bacteria are encouraged to overgrow which can cause the cells in your gut to become ‘leaky’ i.e. the gaps between the cells instead of having ‘tight junctions’ as normal, develop gaps. If you were unlucky enough to have childhood infections and were then prescribed extensive antibiotics these can affect gut flora for life too and exacerbate the problem. Antibiotics are non-selective about which bacteria they kill – the same is true of ‘anti-bacterial’ handwashes which are highly damaging to the gut.


Toxic bacterial overgrowth can encourage auto-immunity as undigested protein fragments (peptides) and toxins are able to penetrate through the gut wall causing the body to react with an immune response to food as if it were an invader. The cells in the gut are meant to be a semi-permeable barrier, finely controlled so as to only allow certain things in. When this control fails by the cells being permanently open, the barrier is broken and disease may result. Excessive permeability has been implicated in such definitive auto-immune conditions as diverse as coeliac disease, multiple sclerosis and chronic fatigue syndromes.


So, leaky gut syndrome is a precursor to many diseases as the gut is key in regulating so many bodily functions. In addition to the direct effects on immunity and inflammation, there are more factors in gut functioning that impinge on your health. The short-chain fatty acids (breakdown products of indigestible carbohydrate in your diet produced by your gut bacteria) are epigenetic regulators[3]; that is they help to control what genes are expressed in the cells. These epigenetic effects of the gut flora help to explain why each of us reacts differently to our environment – since each of us has an individual gut flora we have a unique response to the external environment. Those with a healthy gut not only have a healthier immune system but digestion and metabolism work better, with more nutrient availability, more accurate genetic regulation and intercellular communication. It can’t be overstated how important this is for brain function, especially in the area of pain response.
Although we are all familiar with the idea of ‘gut feelings as a source of information, we are seldom aware how vital the gut is in central nervous system (CNS) function. The enteric (gut) brain really does exist and it is just as important as the brain in your head. Stress (whether conscious and acute, or unconscious and chronic) alters the balance of your gut flora via the release of hormones like adrenaline and cortisol (from the adrenals) and cytokines produced by bacteria. The self-regulating system is sent haywire and the results are systemic (i.e. throughout your body). These findings are so important, the study of these interactions now has its own field

This is an extract from my book Stress, Trauma and Unresolved Emotion in Chronic Disease.
See here to purchase copies (digital or paperback)


[1]10 times the amount of cells in your body! The combined gut flora has been called the ‘third brain’. Gut and brain start off as the same tissue embryologically. They then differentiate into central and enteric nervous systems. The enteric nerve cells are considered part of the autonomic nervous system in some newer definitions, see polyvagal theory later in the book. Brain, Gut, Microbes; First Second and Third brain.
[2] While writing this book I had a free GP health check organised by the NHS. The nurse did not physically assess me (apart from to weigh me and take a blood test). She asked a little about my diet and exercise but it was very general and no advice was given to reverse my hormone imbalance.. What an opportunity missed to educate people about health.
[3] ‘Above genetics’. It means there is another layer of control above what DNA you have. It is a very exciting development in biology. See the epigenetics section for more information.